Guanciale! My cheeky way of saying good morning in Italian. Guanciale was an ingredient in two of my (delicious!) courses at I Nonni last evening and I hadn’t a clue what it was. Neither did Stu or Debbie, but we floated several interesting possibilities. None of us guessed cured pig cheeks, although I was thisclose by thinking it was perhaps some sort of green. Woops! More like a sort of pink. It’s used the way pancetta, bacon, or other cured pork is used to flavor a dish, as in, delightfully. I’m on for more guanciale next trip to I Nonni.

I’m also on for more beef carpaccio showered with chopped arugula, shaved Parmigiano Reggiano, and lemon. More warm, crusty, fragrant bread. More mache salad with paper thin slices of potato. More pasta with fennel sausage, black truffle, and a hint of cream. More rosy, crispy roast duck breast, accompanied by delicious caramelized Brussels sprouts that I could only just taste (my body stopped digesting Brussels sometime in 2004; very disappointing, I love Brussels). And definitely more of any of the wines that I Nonni’s Mark suggests, the wine selection is fabulous and his recommendations were lovely. We

opened with a glass of a delicious and moderately priced Falanghina, a white grape I confess I’d not heard of before. We then shared a bottle of a 2003 Gallina Barbera D’Alba, mmmm… I am most certainly heading back to I Nonni this week to purchase both wines, and others, as well as thoroughly raid the Buon Giorno deli…can’t wait! 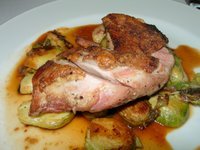 From I Nonni we raced over to The Fitzgerald Theater for the Survival of the Fittestpresentation with explorer Ann Bancroft, one of the Stage Session series presented by Minnesota Public Radio and hosted by the hilarious and irrepressible Heather McElhatton. Heather is a force of a personality and presence, with her curtain of red hair and clear voice and humor that sneaks up on you. Ann shared a couple of riveting stories and chatted with Heather and together they “received” other performers and essayists, including our friend Rudy Maxa, who has an incredible stage presence. He’s got a golden voice, which any of you who’ve heard him on the radio already know. But he’s also very relaxed and engaging in front of a crowd, comfortably chatting about a wide variety of subjects ranging from travel, of course, to Britney Spears, and it was hilarious. Ann and Rudy were but two of a large and eclectic mix of incredibly talented musicians, writers, and speakers, whose performances loosely hung on the theme of “survival.” As a moderate epicurean, check out explorer Dan Buettner’s concept of Blue Zones. And have a listen to the whole show tonight on MPR, from 6-8 p.m.

And then…there’s more!…after the show, we chatted in the lobby with Rudy and Ana, and met Ana’s parents. And Stu and I introduced ourselves to Ann Bancroft, and greeted her for John (who was in Vail for the last several days skiing, hi John! See you tonight!), who has proudly done some legal work for Ann, he thinks of the world of her. It’s not hard to see why. Not only is she obviously bright and brave, she is delightful. Tough and tiny, funny, engaging, I suppose you’re not supposed to say this about an explorer, but she is adorable! And she’s a fantastic storyteller, with a great voice, it’s fun to listen to her. So, at around oh, 12:30ish, we made our way home. Still full from our 6 p.m. dinner, sleepy from the wine, and laughed and entertained out, I rolled into my bed sometime after 1 a.m. No insomnia last night, I don’t think even caffeine could have hampered my slumber (although I’m glad I didn’t test it).

So Nathan and John come home today, my little mini-vacation at home alone is just about over. I think I’ll sneak in a little nap, the last hurrahhhh… Before I snap back to it and figure out what I’m making for dinner. Until then!