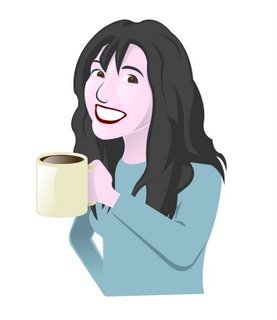 Yay for Friday Morning Coffee with Suz! Well-timed, loads to talk about, things have been so crazy-busy I feel like I haven’t seen her for a year. We sipped our yummy joe, ran into a few old neighbors, gossiped some more, and cackled and shrieked so loudly we damn near chased away all the other customers. Woops! Man, good friends are worth their weight in gold (or in this case, much more, since Suz is pretty tiny and doesn’t weigh very much at all)!

I had to tell her about the blast of a night I had last night – my mom invited me along to her office holiday party at The Chanhassen Dinner Theater for their production of Joseph and the Amazing Technicolor Dreamcoat. I admit, I’m not a big Broadway musical fan of the Andrew Lloyd Weber variety, but I’ve always had a soft spot in my heart for Joseph. I first saw it in oh, 1983, it was my high school’s spring musical production. I remember going in with low expectations…and walking out completely charmed. I went at least another five times (hey, I was 16). I had last seen it in the mid-90s, the big-time Donny Osmond version at the State Theater, very fun. And then not again until last night, almost 25 years after my first viewing (ouch!) – still fun, still charming. Good stuff.

While I was out, John was wrapping up the two-month-long celebration of our 5th anniversary. Huh? Well, back at the beginning of October, after much brain-wracking in an attempt to come up with a gift worthy of my sweet husband, I birthed two 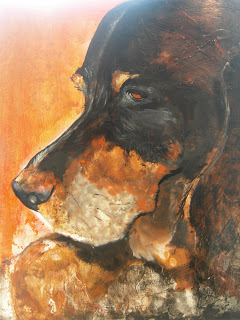 pretty friggin’ awesome ideas. Idea One: a surprise dinner with his boys, his long-term buds, at 20.21. I got emailing right away, tossing out dates, and came up with…December 13th?! Ack, so far away from October 19! I felt I needed something else too, something closer to the big day, hmmm…

And then, Idea Two: I commissioned my coolicious sister Stacey to paint a portrait of Sigmund, John’s dear, sweet dog who passed away last March (and who he’s been missing mightily, sniff). An entire painting obviously couldn’t be ready by the 19th either, but Stace thought she could have it done by Thanksgiving, so I told John he had two kickin’ gifts coming. And so…Stace did her thing and delivered the painting on the Sunday of Thanksgiving weekend. It is, as you can see, completely amazing, a fabulously Stacified Siggy Roo, John was (is) absolutely blown away. BIG time hit. (Yesss!) Then last night…finally the dinner with his boys, total blast, a bawdy feasty feast that had the guys thanking me for thinking of it. (Yesss again!) So there. We are really, truly, absolutely done celebrating our anniversary.

Although for dinner tonight perhaps we could….