Nathan’s home again today, the third day in 2 weeks, sigh. He spent the morning with Carter and then I – after finally making my Byerly’s run! – swung by and picked him up. I don’t think he’s going to be much into eating dinner tonight, we’ll have to see. I’m making one of John’s favorite things in the whole world. No, not chicken and rice (that’s tomorrow night, ha) but chopped steak. That’s right, good old-fashioned chopped steak, his Nanny Claire used to make it for him, it’s a nostalgia thing. I bought choice NY strip steaks and chopped (small dice) them myself, coarsely, added salt and pepper, and made several patties. Before I cook them tonight I’ll dredge them in flour, saute them, and make a mustard/mushroom pan sauce. With roasted asparagus. Should be nice.

Suz sent me an email saying that iTunes rated our podcast explicit – holy shit! Me? Explicit? I mean, this has nothing to do with f-bombs, I don’t even think I’ve said fuck yet on Feminine Hijinx. It’s purely the content! Don’t say I didn’t warn you… 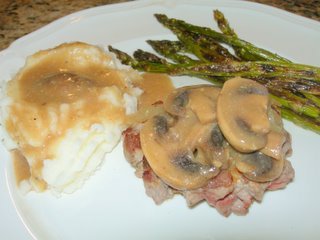 Mashed potatoes… Mmm… Love ’em. Which is why I don’t often make them. Because no one else around here does, pretty much just me. John will eat them, especially with chopped steak and roasted asparagus, one of our favorite veggies. A heapin’ helpin’ (well, not too heapin’) of comfort food, ahhh. I ate it alone, what with Nathan not feeling well, and John having to work late to make up for being away on vacation part of last week. But that’s OK, still tasted great. Especially those damn potatoes… The key to great smashies is putting them through a potato ricer. Takes about 2 minutes and makes them perfect, and I’ve experimented with all the techniques. Nothing touches the ricer for fluffy mashed potatoes. Add a little butter and half-n-half to taste, little salt (I’m not a fan of pepper on mashed potatoes, to me this food is meant to be purely white) and there they are, potato heaven. Delicious with the mustard pan sauce.