So, to pick up on a couple of riffs from yesterday (and no, don’t worry, I am NOT drinking beer today, ha)… First, dinner at Fogo de Chao was fantastic! What a blast! What a scene! That place is hoppin’, people, and while many of the customers were Badger fans (how do I know? Because Badger fans wear their red Bucky clothes all the time, including out for dinner at Fogo de Chao…), I have a feeling that the place does just fine on other nights too. It’s HUGE! And festive, with adorable Brazilian gaucho chefs wandering around with skewers of succulent fire-roasted meats – lamb and chicken and tri-tip beef, oh my! The entire staff is Brazilian, as far as I can tell, so Mary (my college Portuguese professor) chatted up a storm (in Portuguese, natch) while I offered the occasional “obrigada” (thank you) and then asked Mary, “Um, how do I say, ‘My name is Stephanie?’ in Portuguese?” Yeah, great memory. I can remember outfits I wore to class… I can remember which football players were in my class (as my stepmom Susanna recently reminded me, I did have quite a soft spot for the football players in my Portuguese class, rarrr)… I can remember all sorts of (high school) 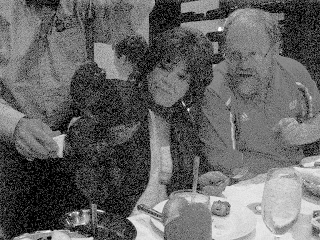 French… But actual Portuguese, I got nothin’. Obrigada, brain, obrigada.

Anyhow, my camera battery was dying (thus the horribly grainy pic), but I just had to try to capture this unlikely scene: my tiny, pretty mother, she who birthed two un-tiny daughters (me-5’11” and Stace-5’10”), with her tiny appetite, staring wide-eyed at these big ol’ skewers of roasted meats, totally being a good sport while the gauchos offered slice after slice after slice… I have to admit, I couldn’t eat much either, I was too full from all that damn Badger Blast beer. And the several bites of the Be-Wiched roast beef sandwich John brought home for me (be sure to check out Be-Wiched, it rawks). But it was great to see Mary Schil, and her friends Ron & Linda and their daughter Brooke. Especially when I offered them a ride back to their hotel, thankfully only a few blocks from Fogo de Chao – seeing a man as big as Ron (he’s the one next to 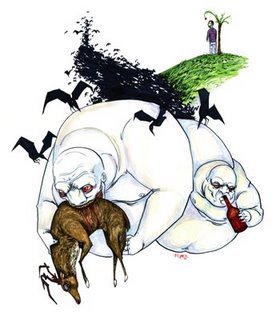 my mom, above), riding on all fours in the trunk of my not-large wagon (the only way he could fit)… I haven’t laughed that hard in a very, very long time. Thank goodness he laughed right along with us. Damn, I’m wiping my eyes all over again. Ron = Good Sport, fo sho.

So, oh! The second riff is that I’m definitely going for the roasted Chicko chicken tonight… I’ll post later on the specifics, but for now my plan is to keep the first attempt simple. Nothin’ but salt and butter, baby. And did I mention that Nathan and John are, as I write, making a run to Maverick’s for their killer roast beef and brisket sandwiches (John’s clearly got a sandwich thing goin’ this weekend)? Uuuurrrrgh… Moderation, Moderation, wherefore art thou, Moderation? Stay tuned…

Alright, I’m back with my roast chicken update! The Chicko is brilliant, absolutely brilliant. After a bit of a beginner’s hiccup (I 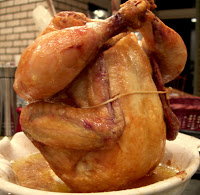 initially had the bird legs-down, kinda like a headless Buddha, then quickly realized it was going to cook more evenly legs up – I also realized that breast-down means more succulent white meat, always a good thing), I was good to go. No turning required (I did baste with melted butter a few times), just a beautifully crispy, juicy, browned chicken. So it’s official – I’m a certified Chicko-phile! A Chicko-Chick! Leggo my Cheeky Chicko! Well, when I actually get one… Which will be soon, I just ordered one; with as many times as I roast chicken for dinner, I figure I might as well make it as good as possible, as soon as possible, non? Thanks to Kevin and Kristi for discovering and proselytizing this little beauty, and to their disciple Lindsay for loaning me her Chicko in the (successful!) effort to convert me. Amen.