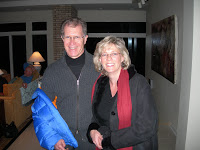 Happy Birthday Stu The Wine Genius! I forgot to wish him Happy Birthday last night when he and Debbie were here for my party. They had flown in from sunny Florida earlier in the day, quickly switched mental gears into winter mode, and then set out in a snowstorm for our house. Today Stu will be ice climbing! The Williams embrace it all, most definitely – that’s why they’re such a blast to hang out with! (Can you say Napa, in April, with Rudy Maxa and Ana Scofield? Here we come and I. Can’t. Wait!)

As was everyone who made it here last night. It takes a certain adventurous (reckless?) spirit to set

out for a party in a snowstorm, so those who made it here were definitely ready for some action, namely FOOD. And plenty of food there was! (See below.) Oh, so good, there are some nice leftovers of which I will giddily partake this afternoon…yeah, baby! I probably ate 20 tuna tartare potato crisps last night, uff I was full. Totally worth it, of course! Despite my ongoing efforts to pare things down, I’ve thoroughly enjoyed several lovely meals and glasses of wine in the ongoing celebration of (the end of) my 40th year. (Yeah, it’s been rough, ha. I should have turned 40 years ago…)

I received – get this – a Mod-Hair Ken doll, from – who else? – Kim and Suz! I’ve oft reminisced about my 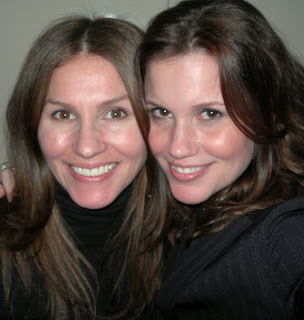 Mod-Hair Ken, with his white turtle-neck dickie, brown-n-white checked sport coat, and decal facial hair. Soooo cheesy 1970s, I loved him (and so did my Barbies, ha!). Suz and Kim, dear friends that they are, were actually listening to my dumb stories and took it upon themselves to find me a Mod-Hair Ken (yay eBay!), to craft decal facial hair when none was available (yay Suz!), and to design an evil-genius-raunchy, perfectly photo-shopped birthday card (yay Brian and Kim!) that depicted, uh, a me-Barbie in some rather uncompromising positions with said Ken. I’ll let you imagine the details. If you’re having a hard time, it included pom-poms and an askew dickie. Yeah. ‘Nough said. (OMG, it’s hilarious, totally made my, and 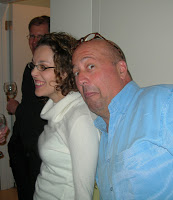 It was particularly cool of Andrew and Rishia Zimmern to show up, because 1) they live in St. Paul so had a nasty drive, and 2) Andrew’s Bizarre Foods television series, the filming of which has had him traveling constantly the last several months, finally debuts on the Travel Channel tomorrow (Monday) night (woo hoo!) and they are swamped getting ready for the big event! Make sure to tune in!

Oh, I just have to point out how gorgeous all the girlfriends looked last night! Being the practical yet stylish Minnesotans they are, all showed up in snowboots, carrying their party shoes separately to don once in the house. Genius!

Well, I sure had a great time last night. Again thanks, my dear friends, for making my party so special! And thanks to Silver Service and the staff from Vincent’s as well. Snow be damned, we had a party!