A hearty thank you to Cindy Crawford and her mole! I don’t look much like Cindy, but people (sometimes; not that often, really, but bless their hearts when they do…) tell me I do because I have a mole too (hers is on the left, mine on right, both in this posting and apparently in real life). Woo hoo for models with flaws that match mine!

Today won’t be a big cooking day, I think John and I will go out tonight. I’ll sneak in my camera and see if I can photograph what I order. See if I can remember to photograph what I order is more like it. When I go out I sort of get lost in the chatting, sipping, tasting – senses on fire. There have been a couple of meals – French Laundry in CA and Alain Ducasse at the Plaza Athenee in Paris – that were so mind-blowing that I could not sleep afterward. Sensory overload. I don’t expect to achieve that tonight, although I have had some delicious meals lately here in good ol’ Minnesota. Carnitas at Masa, roasted squash at 112 Eatery (really, everything is good there, but just try to get in), duck ravioli at Fugaise, and of course the several interesting courses I wrote about previously at the St. Innocent wine event at Luci Ancora. I hope we’ll hit something tasty for tonight – I’d better get on the phone!

Well, options are most certainly limited when you attempt a Friday-night reservation at 1:00 p.m. on Friday. Oops. I’ve got a 5:15 p.m. at Fugaise, we’ll see if John will go for it. (Hope so!)

Sigmund’s back paws have sores on them from the ice/salt outside. Our friend Marty and I put socks on him today before Marty took him for a walk – didn’t 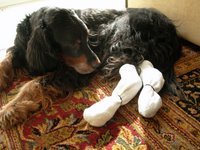 work so well, but it sure did look cute (this weekend we have to get Sigs some boots). He’s lying here in the living room, in the sun (finally, some sun!), giving a pretty skeptical look to the socks. He didn’t mind them a bit, though, so hopefully he’ll be as flexible about the boots. When he was younger, John tried to put boots on him, but said they lasted about 5 minutes before Sigs had ripped them off. He’s not nearly so perky now, I’d bet they’ll work just fine.

Here’s the deal. We didn’t end up at Fugaise (however, I did politely cancel our reservation; they use the Open Table online reservation service, it’s fantastic), we had dinner with our friends Jon and Amy Brown, at the jazz club Rossi’s, and we had a blast. John and I were planning a movie first, but as married couples often do, we WAY miscommunicated on the timing of it, so John went without me. And I? I took a long, luxurious bath (Molton Brown Invigorating Suma Ginseng), which tops just about any movie, and it worked out better than fine. And then we met up with Jon and Amy. Laughed our asses off, which we always do with them. Amy is crazy-funny, with a slightly evil sense of humor that I love, and I die laughing every time we get

together. And Jon is a riot too and this is very important – a Badger – woo hoo! We had a “good enough” dinner – Jon ordered a lobster bisque which Amy, Jon, and John all concluded had “something wrong with it.” Hilarious! With that ringing endorsement, I opted not to try it, ha. We did, however, enjoy a couple of rounds of

oysters on the half shell which were delicious. And I had fried shrimp, which seemed like the way to go in a supper club sort of place. Tasty, with some nice garlicky sauteed veggies on the side. Worked for me! So insted of a quiet sort of movie/dinner night, we ended up having a blast and a much more fun way to usher in the weekend. Now, it is officially time for bed…ahhhh…bed…