In the name of moderation, I have an appointment with this piece of equipment today. A Russian kettlebell. I was introduced to Russian kettlebells, or KBs, by my stepmom, Susanna, who I believe was introduced to them at her health club. She raved a bit about them, so I looked them up on the web, and came upon this Russian Kettlebells website (link also at right, under Health). It’s a somewhat freaky website, but really fun too, and the information is fantastic. KBs are one-stop weight/flexibility/cardio shopping, and fun and challenging to use. They’re also, it turns out, rather chic, according to an article in Vogue magazine featuring them that my sister-in-law Valerie pointed out to me a few months ago. My only problem with them is I don’t use them often enough. Ha. I’ve travelled a few times with two small 4 kg KBs, one in each suitcase, but John’s pretty much forbidden that now since one of my suitcases exceeded the airline’s allowed weight limit and I had to repack my bags in front of the skycap. As you can tell from the photo, these things look like bombs, and the whole bomb-airline thing doesn’t work so well. Also, they make my luggage too heavy for me to hoist into the car or off the luggage carousel, which means John has to do it, and he doesn’t particularly appreciate tossing around my 60-lb. suitcase. Which is SO too bad, because they are the PERFECT hotel room exercise. Once you nail down the basic techniques, you can have yourself gasping for breath and pouring sweat in a short period of time. A very nice way to balance out the usual travel over-indulgences. But, I’ll have to stick to using them here, in my own home, to balance 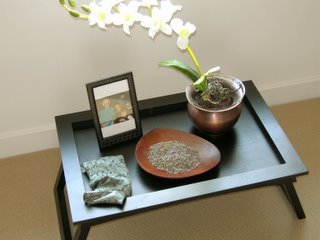 out my every-day over-indulgences, and they work well for that too. For a cool-down, I’ve developed what I call my little Zen table. Lavender potpourri (Agraria, heavenly stuff), a fake orchid (I know, that’s so not-Zen, a fake plant, but I had it around so I put it there until I buy a real plant), a photo of my Grandma Meyer with Nathan and me (because I loved my grandma and I miss her and think about her alot and that makes me feel good), and a sage-scented eye pillow. I lie down next to this little table, lay the eye pillow over my eyes, attempt a really brief meditation, feel nice and relaxed, and before I fall asleep (it’s happened, right there, in the middle of the floor) I jump up and get on with my day. It’s nice.

So. For dinner, we’re going meatless, which I try to do once or twice per week. That moderation thing again, damn. Broccolini with orechiette pasta. Not sure exactly how I’m doing it, I think with garlic and a little red-pepper flake action for some heat. We’ll see how it plays out. 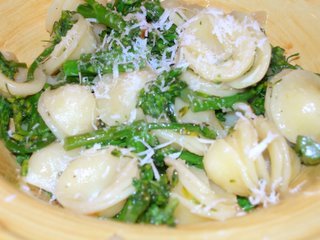 Well, it played out quite nicely. Deliciously, in fact. I haven’t cooked much with broccolini which is an oversight on my part. Easy to handle and quite good all on its own (I sampled several pieces of it in the saute pan before I tossed it with the pasta. Just checking seasoning, of course, that’s always my excuse…). I just chopped it, sauteed it with olive oil for a few minutes, tossed in sliced garlic and red pepper flakes, and finished it with the cooked orechiette and a good amount of pasta cooking liquid and coarse salt to make a nice sauce. Grated a pungent Pecorino Romano

over it all. Mmmm… Perhaps heady stuff for a first date (the garlic, the heat), but otherwise, go for it! You could back off on the red pepper flakes for kids, if you’ve convinced them that broccoli (and thus broccolini) is just baby trees and they happily eat it. All good – yummy, pretty, healthy. We opened a Sanford Pinot, oh…yeah…to have with it. Just check out how content John is, post-dinner, reading his Rolling Stone magazine, finishing a glass of Pinot. Happy Monday. (Recipe in comments, below.)