Used my herb butter to make myself a little brunch – nothing new here, I’ve written this before – egg over-easy on toast (cooked the egg in a little herb butter, put a little on the toast) with chopped arugula and scallions. Salt and pepper. Glass of champagne. Delicious. Aaaah, Sunday morning. Love it. With that reinforcement, I can now head out for groceries and back here to prepare some version of chicken & rice for dinner. Sort of Saltimbocca-ish, with crispy prosciutto and sage? Hmmm…that sounds good. Or with a Marsala pan sauce? (That’s John’s true fav.) I could be in the mood for a Piccata-like dish, do a lemon and caper sauce. But I doubt the kids would dig that. And I can’t blame them, I don’t think I was a big caper fan when I was a kid either, ha. I think I may go the prosciutto/sage route, with a RED wine pan sauce, oooh, yeah, a nice Pinot, have the rest of the bottle with our dinner. That’s it. OK, with that settled, 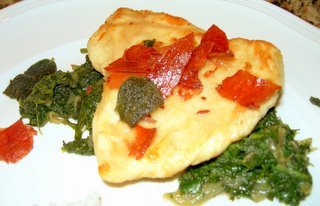 I’m off, out into the snow! Almost odd to see snow, since it’s been so warm for so many days. But it’s good to see. It’s still January – when the weather doesn’t act its age, I get all out-of-sorts.

Well, I did indeed go with the Saltimbocca-like chicken, quite tasty, if I do say so myself (recipe posted in comments, below). I honestly didn’t feel much like pinning prosciutto and sage leaves onto pounded chicken breasts with toothpicks. So I didn’t. I did pound the chicken breasts flat, and dredge them in flour, and saute them quickly in olive oil. THEN I sauteed, separately, the prosciutto and sage leaves, until both were crispy. Took them out of the pan, then added and reduced chicken broth and wine (the Pinot), and whisked in some butter to finish the sauce. Served the chicken on top of sauteed spinach and caramelized onions (recipe in comments), with rice on the side. The only problem with making chicken & rice for John is that he eats WAY too much of it, and regrets it, and moans the rest of the night. Other than that, it worked out well. Nathan, and visiting 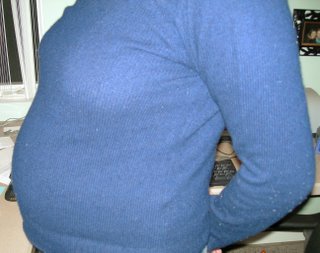 friends Oliver (also 9) and Benjamin (8), happily ate lots of chicken & rice. And Oliver and Benjamin’s mom, Bridget, and my sister Stacey, were happy to have the spinach, along with everything else (unlike the boys, ha). So a great night, the boys had a blast playing outside on the hockey rink, no skates needed, just running around in the snow. Nice way to end the weekend! (And here’s a picture of Baby Boom Boom, already adorable, I can just tell…)

And P.S., Andrew, we all really miss you. You left us all too soon. Damn you. Every time I cook something over-the-top, I think of you. 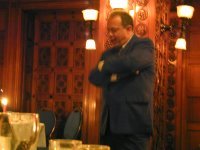