I talked Nathan into letting me make him pancakes for breakfast…I can’t believe a son of mine, or Carter’s (we’re both famous pancake eaters), doesn’t like pancakes, but there it is. He indulged me if I agreed to also make bacon – deal! So I made Susanna’s sister-in-law Anne’s Orange Yogurt Pancakes. I’ve had a little hankering for them since Stace said she’d polished off quite a few while in Montana a few weeks back. They really are the best, mmm… (Recipe posted in comments, below.)

I was careful not to over-consume them, as tempting as it was, because nothing is worse than being stuffed with pancakes. Bricksville. Ack. And I have things to do today that involve something more than digesting a load of pancakes, ha. Like a KBs workout! And a baseball game! And John and A returning from NYC! (We basically traded places – Suz, Kim and I got back on Sunday, John and A took off on Wednesday…and at first report had a total blast. Hit a few of the same food highlights as we did. A realized, for the first time, that Madison Avenue has some kickass stores, you know, like Louis Vuitton…here we go! And they spent a chunk of time with the Bryt Family – Natalie, Catherine, and A have known, played, and giggled with each other since they were babies. From what I hear, they’re still going strong…) And had a lovely hang at the Kimmel’s, at their pool, with the whole family, Barbara, David, Molly, Max, and Levi. (We’re hoping the Kimmels are making their way to Minnesota soon, they’re the most fun house guests EVAR…) 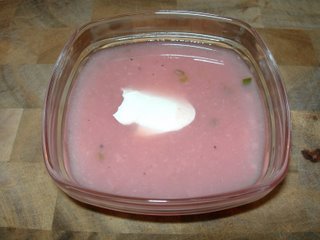 I finally tasted the radish soup today, chilled, with a dollop of creme fraiche, for a light lunch. Delicious. Very beet-esque, actually, I suppose beets and radishes aren’t so dissimilar when you think about it (I’ll post the recipe in comments, below). I’d say if you’re a beet soup fan, and find yourself with excess radishes, or are looking for a pretty, tasty, very easy chilled summer soup, give it a go. As I said, with a bit of creme fraiche, and perhaps a few thin slices of toasted baguette, you’ve got yourself a lovely light lunch. Or dinner first course.

Grrrreat baseball game, much better than yesterday on a couple of levels: 1) they won, big time, and 2) the weather was gorgeous. An extraordinary day to be outside. We came home to discover John, back from NYC, sitting by the pool! We joined him, eventually made a simple taco salad for dinner (greens, spicy beef, onions, tomatoes, sprinkle of crushed tortilla chips, jack cheese, and taco sauce – fab), and sat outside for a couple of hours, taking in the happiness of being back together and yet another gorgeous summer evening. Aaahhh… Damn NICE.