We will not be huddling outside, freezing our Minnesota asses off, this Memorial Day weekend, no sir. It’s gonna be a hot one, smokin’ hot, and sultry too (my hair HATES humidity, oh well). I’m running over to the store without a specific plan, to pick up steaks, chicken, burgers, buns, chips, fruit, salads, beer. Then we can wing it and grill whatever the heck we’re in the mood for – yes! The kids will swim, I’m going to read and read, John’s coming home early today. Should be a really nice weekend. Hope you have plans for a relaxing weekend as well.

That’s a Pilsner Urquell in my hand, but it turns out it’s more of a Killian’s Red kind of night. I have had so much fun today – I received yet another load of oldies but goodies to sort through. 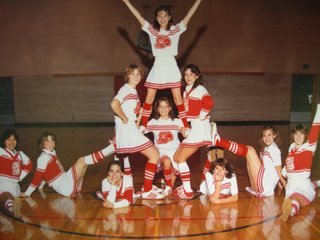 More darling baby clothes, yes, but also a goldmine box of memorabilia from high school. Red River High School, Grand Forks, ND, go Rough Riders, woo hoo! Class of 1985, ahhhh, good times. Seriously. Really, really good times. I’m having the most fun going through the Schroeder Jr. High stuff, actually. Schroeder Raiders (rhymes, btw). Because my ‘rents were divorced, I spent my summers in Lakefield, MN, with my dad and stepmom Susanna. Lots of way-pre-email-IM letter writing from my friends Stephanie and Kim, and they are priceless letters. My stepdaughter was reading through them tonight, and through what people wrote in my yearbooks, and totally cracking up. John’s vote for best pic is of my

Schroeder Jr. High cheerleading pic, I’m at the base of a pyramid (second from right), with my legs up and butt showing. I was horrified – in that OMG, I want to die kind of way – by that picture, I couldn’t believe the photog didn’t point out that my 15-year old butt was hanging out, what a jerk. Hilarious now, though, you know, 24 years later. Ack… My fav is this picture of me, Kim, and Stephanie, at Kim’s confirmation. Spring of 9th grade. Steph and I were 15, Kim only 14, oh, we were babies. We’ve been friends for a looooong time, girls. I’m so lucky. It’s fabulous. 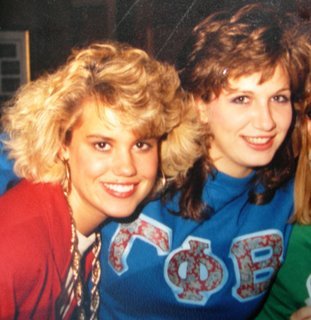 Indulge my nostalgia with one last pic, Cami and me, drunk at some godawful Gamma Phi Beta party in Madtown, fall of 1986, the year I became a blonde. I was a bottle-blonde for, let’s see, I guess only two years of my life. Is that it? Sheesh, it certainly seemed longer, I thought it sort of defined my whole Madison experience, but no. Lurved my blonde hair. Looks like h-e-double-hockey-sticks when I look at it now, what on Earth was I thinking? My Kelly McGillis-Top Gun look,

hahahaha. Nice shoulder pads. Again, ack. Ah, youth. I’m much less dramatic with my fake hair color these days… I drink alot less too, and you know, hang, with alot less guys, in fact, just one… It’s nice. I’d rather be 39 than 19 any damn day. Except the skin doesn’t look as good, courtesy of tanning beds (no!), miss that. Oh well…