Cool, crisp salad topped with a warm poached or over-easy egg. Prrr… If you haven’t converted, you MUST, it is truly one of the best dishes on the planet. The greens tossed with a tart vinaigrette cut the richness of the yolk, a bit of minced basil adds a hint of sweetness, crumbled bacon and sauteed croutons add salt and chewiness, minced scallion and a grind of black pepper bring it all home. I’ve talked about it several times already, I know, in several variations (topping toast with an over-easy egg and chopped arugula, for instance, which Donna kindly acknowledged was pretty darn tasty; or the recent frisee, poached egg, lardons salad that I enjoyed at Cafe Lurcat), but I think I haven’t posted an actual recipe, so I will today. For the exact salad I just made and savored for lunch, it was sublime. I took advantage of a stale baguette to make killer croutons, but you could certainly start with fresh bread. (Recipe posted in comments, below.) 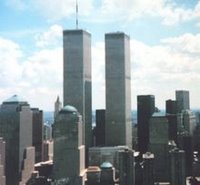 I’m fully recovered today. I was toast yesterday, a lazy combination of hungover-exhausted-content. Had a great day of doing almost truly, absolutely nothing. Saw United 93, on my dad and Susanna’s recommendation, and it was riveting and incredibly sad. Not just worth seeing, but in fact, important to see, that’s how I felt afterward. Very well done, neither frivolous nor abusively melodramatic with the raw and powerful truth of the story. I admit, I’ve sort of tucked 9/11 away, in my disgust with how it has been, in my opinion, tragically and mistakenly translated into a war in Iraq. But this film brought the event back to where it belongs, worthy of conscious consideration on an on-going basis, even if one doesn’t agree with the decisons that have been made in its wake.

And then. We were home, back to the mundane pleasures of the daily grind. Darling John washed all the glassware from Friday night’s winefest. And he took Nathan for a game of

frisbee golf, and out running errands, and I did very productive things like watch Sex and the City on HBO on Demand. I was in a New York state of mind, I guess. The shots of the Twin Towers in older episodes are so lovely and sad. The shots of Carrie and the girls in their fabulous clothes are so happy and decadent. The shot of me lazing in my bed watching TV is relatively pathetic, ha. But ohhhhhh, it felt goooood.

Have a nice Sunday. NICE!