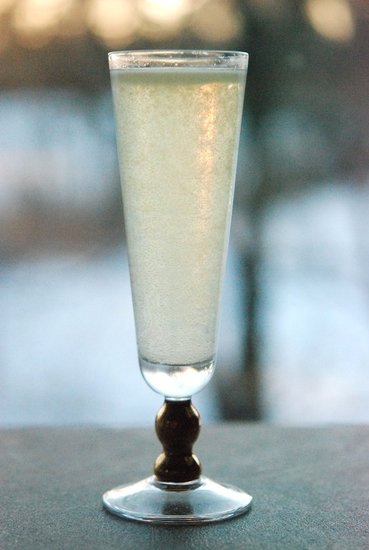 Happy New Year! Bubbles aren’t just for New Year’s Eve of course, in fact in my book they’re for every day (bit of an obsession), especially when topping a fabulous cocktail. When I had the idea to conjure a cocktail recipe to open 2012, I immediately tweeted my minxstress friend Molly McNeil, she of the sangria recipe I posted in October. We are both big, BIG fans of gin cocktails, especially with bubbles, and she came through in spades with this lovely sparkling tipple.

Molly notes that the cocktail has its roots in WWI, with two theories on the French 75 name. The first holds that French soldiers would drink the concoction before heading into battle, where they used their weapon of choice, the French 75mm field gun. The second, which sounds spot on to me after testing a few rounds of the recipe – kablam! – holds that the combination had such a kick that it felt like being shelled with the powerful French 75mm field gun, also called a “75 Cocktail,” or “Soixante Quinze” in French (via Wikipedia).

My husband John preferred a bit of sugar in the mix, so I’ve made note of that option in the recipe. I liked it both ways, but I prefer cocktails on the drier side. You decide which version you like best. Be prepared to giggle your answer.

Note: In my house, this cocktail is now known as the Mollytav.

Combine gin and lemon juice with ice (plus sugar if desired) in a cocktail shaker. Shake. Strain into champagne flute and top with champagne and bitters.