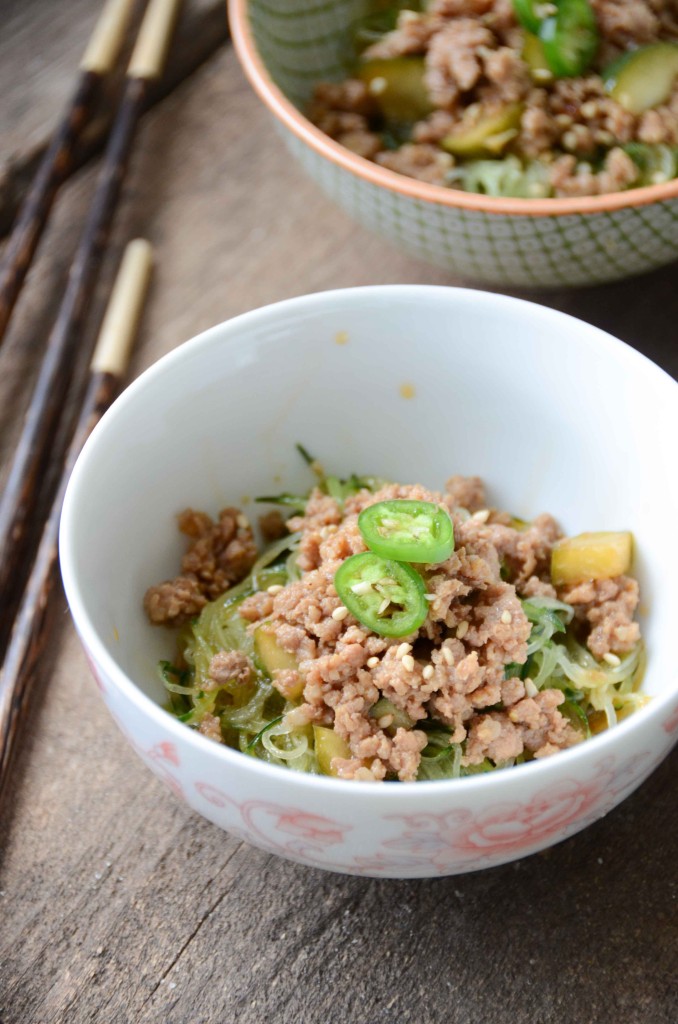 I was going to share this recipe next week, but given blistering temps and tropical humidity, today is the day, The Perfect Day, for Dan-Dan “noodles.” I spent yesterday and Sunday out at the Minnesota State Fair, talking about food (of course), sweating like I have never sweat before in my life, and both days I was thrilled to come home to this cool-n-crunchy, hot-n-spicy, pleasantly salty dish. (Followed by the coconut milk panna cottas also sitting in my fridge; but that’s the recipe I’ll share next week.)

The key to this version of “noodles” is cutting cucumbers into long, spaghetti-like strands with a spiral slicer. I’ve wanted a spiral slicer for so long! I finally got my act together last week and picked one up. (They can be found at local kitchen supply stores and online.) That said, if you don’t have a spiral slicer, a mandoline or sharp knife yields perfectly lovely strips as well, it just takes a bit longer.

Given the moisture in vegetable “noodles,” I made a less saucy version of the Dan-Dan topping. I used ground pork instead of ground beef, which I prefer for its silkiness, but if you’d rather have ground beef, it’s all good. I possess pretty mild chili oil from the grocery store – chili oil for a Minnesota palate – so I’ll definitely be picking up a bottle of the real deal from an Asian grocery soon. I like Dan-Dan noodles that make me sweat – the version at Tea House in Plymouth, for instance – because they’re swimming in a hearty dose of chili oil. Kablam. If you too have lame chili oil, and you’re looking to match your internal heat with this sultry heat wave, add a big ol’ pinch of red pepper flakes to the pork.

The sesame seed paste is what makes the dish, so don’t skip it! Oh my gosh it’s so good I was picking at it the entire time I browned the pork. I made mine in a spice grinder (aka the extra coffee grinder I own for grinding spices) and it worked like a charm.

PS If you’re at the Minnesota State Fair this Friday, August 30, swing by Carousel Park around 11:00 am. I’ll be chatting all things food with Minnesota Public Radio Daily Circuit host Kerri Miller, along with James Norton and Andrew Zimmern, for the Foodie Friday Roundtable. If we’re too hot for you to handle in person, tune in! And if you’re at the Fair this Sunday, September 2, in need of a cool glass of wine, swing by the Minnesota Wine Country exhibit. I’ll be doing a cooking demo with chef Scott Pampuch at 12:30 pm and pairing gluten-free Fair finds to Minnesota wines with Amanda Paa at 3:30 pm.

Before you head out, see the Twin Cities Live clip below for Fair Foods Worth Finding according to Stephanie March of Mpls.St.Paul Magazine, Joy Summers of City Pages, and me. (We had a LOT of fun!)

See you at the Fair!

Line a baking sheet with two layers of paper towels. Spiral slice the cucumbers into fine or medium-thickness “noodles,” spreading them on the paper towels as you go. Lightly sprinkle the noodles with a bit of salt and let them sit (drain) while you prepare the sauce.

In a spice grinder or small food processor, combine the sesame seeds, 1 Tbsp. of the sesame oil, sugar, and 1/4 tsp. of salt. Process until powdery. Set aside.

Heat vegetable oil in a large skillet over medium-high heat. When oil is hot, add pork to the pan and stir-fry, breaking it up as you stir. When the pork is just-done, about 4 minutes, stir in the soy sauce mixture. Cook for 1 minute until heated through. Remove from heat and stir in pickles. Taste and adjust seasoning with a bit more soy sauce (for saltiness) or vinegar (for acidity).

To serve: press more paper towels on top of the noodles, blotting as much liquid as possible. Divide the noodles among four bowls and sprinkle each bowl of noodles with a bit of chili oil (to taste).