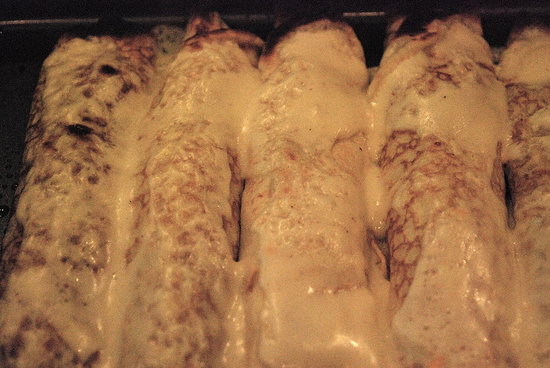 Well, John and I abandoned moderation yesterday in the name of Julia Child crêpes stuffed with ham and mushrooms, napped in sauce Mornay, and run under the broiler. I came to the idea in my typical way – I, er, stole it. We had a version of a similar dish the night before, at Bar La Belle Vie, which planted a little craving in my brain, and as luck would have it we had some good ham in the cooler…and crêpes are really so easy to make… So voila, crêpes with ham. A little paging through Mastering the Art of French Cooking got me thinking mushrooms too, as well as sauce Mornay (cheese sauce made with a roux), and pretty soon restraint flew out the window, the butter was on my cutting board, and the blender was whirring away (crêpe batter is a cinch in a blender). 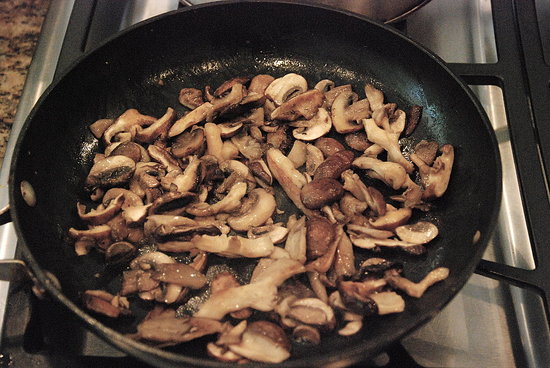 The only actual recipes I used were for the crêpes and sauce Mornay; the ham and mushroom filling, I just winged. I sauteed a small, minced clove of garlic in some melted butter for a few minutes, then stirred in about 3 oz. of thinly sliced wild mushrooms. When they were tender and starting to brown, I add about 6 ounces of chopped, shaved ham and stirred until warmed through. By then I had also made the sauce Mornay, so I stirred in a generous spoonful or two to bind the filling, seasoned the whole with salt and pepper, and was ready to roll (literally). 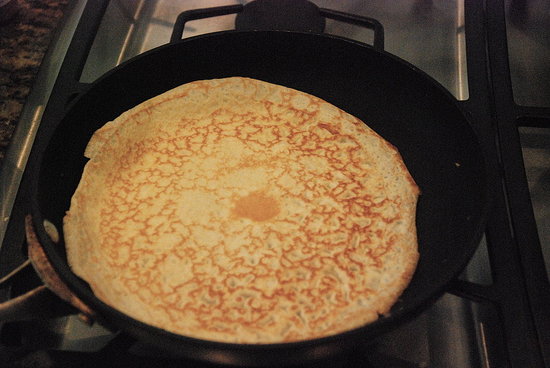 After prepping the crêpes (I made six and saved the remaining batter for later – it keeps perfectly in the fridge for a few days, ready to go, a rather dangerous convenience), I put 2-3 Tbsp. of warm filling on each crêpe, rolled them up, and laid them out in a buttered casserole dish. To finish, I topped the rolled crêpes with sauce Mornay and ran the pan under a moderate broiler until lightly browned. We ate them – tender, salty, lightly cheesy – with a glass of champagne and felt fine. And full. Salut!

From Mastering the Art of French Cooking, re: Crêpes Farcies et Roulées:

Every French household makes use of crepes, not only as a festive dessert for Mardi Gras and Candlemas Day, but as an attractive way to turn leftovers or simple ingredients into a nourishing main-course dish. Crêpes may be rolled around a filling of fish, meat, or vegetables, spread with sauce, and browned under the broiler. More spectacular is a gâteau de crêpes in which the pancakes are piled upon each other in a stack of 24, each spread with a filling. This is then heated in the oven and gratinéed with a good sauce. Or the crêpes may be piled into a soufflé mold with alternating layers of filling, heated in the oven, un-molded, and coated with sauce. Whatever system you decide upon, including rolled crêpes, the dish may be prepared in advance and heated up when you are ready to serve.