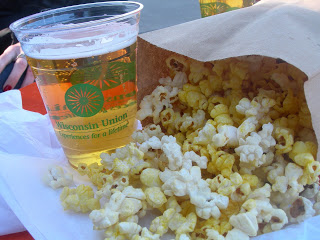 On Wisconsin! Or, not so much, since I’ve been back for a week already, and the Badgers are 0-3 in the Big Ten as of last night. Ouch. But no matter, the real reason for last weekend’s trip was to get together with my long-time friends Cami and Michelle, and the three of us had a BLAST. Beautiful weather, lots of walking, drinks on the Terrace, Saturday morning Farmer’s Market, dinner at Kabul, beer at the KK, and a real-deal Badger tailgate party (grilled brats with all the fixin’s!) more than made up for a sorry 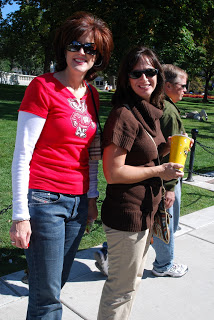 football game. We had low expectations for the game anyhow – the fabulous Wisconsin Marching Band had been suspended from playing last weekend. Boooooooo! Camp Randall without the band? Pfffft, nothin’. Oh, the student section managed a few raunchy cheers on their own, but the pom squad had no drums to shake it to, half-time was completely silent, and at the end of the game, everyone just…left. No 5th quarter = no fun.

As is typical for me, a few nights of less than adequate sleep (and more than adequate beer) means getting sick. I knew I’d blown it by Sunday night – sore throat, raspy voice, here we go. I did my best to fight it off this week, but here I sit, coughing and sniffling, damn those Badgers! (But totally worth it!)

I even rallied to put on a bit of a feast Thursday night as we loosely celebrated Yom Kippur. John doesn’t fast, and I’m not Jewish, but no matter – we invited Jewthran Suz and her family, and Stacey, Cooper, and Bowen as well, and had a lovely meal in honor of the most important of Jewish holidays. I made matzo ball soup with very rich chicken broth, beef brisket with gravy, mashed potatoes, green beans, and challah. Suz made a caramel apple pie and a pumpkin pie for dessert, both to die for. It was a school night, plus we had little Coop, so we ate early (and heartily, uff), and toddled off to bed by 10:00. L’chaim!

garlicky-ness cleared the sinuses quite nicely. Wish I had some of that matzo ball soup for today, oooh, but no, it’s all gone. Sniff. I still have a spot of delicious, beefy gravy left from Thursday’s meal, however; I’ll have to innovate around that so it doesn’t go to waste. Perhaps something a la stroganoff – whisk in a bit of sour cream, serve over sauteed steak and mushrooms, I can picture it. Yeah, I can picture it quite clearly, in fact. I’m off to the store…