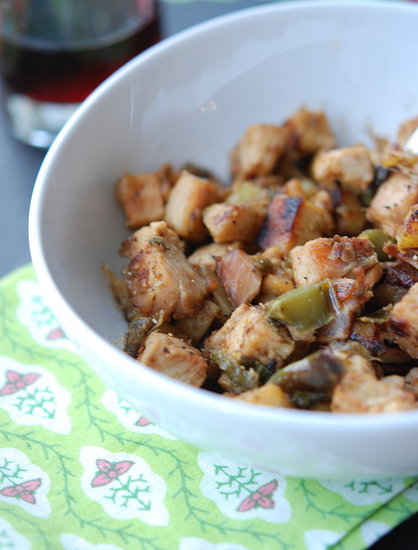 I’m a bit ahead of the curve here, assuming that you have leftover roast of any sort in early September. (Reveals my fatalistic if-summer’s-over-then-it-must-be-winter attitude.) But just in case…

I personally had a few lovely slices of leftover boneless, skin-on turkey breast, which I’d rubbed with herbs and olive oil and grilled until nicely crispy. John and I hardly made a dent in it, but that’s OK. We enjoyed hearty sandwiches and then…heavenly hash, God’s gift to leftovers. Yeah. 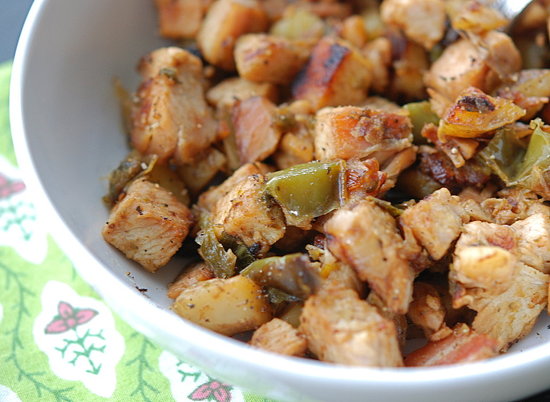 Too many people picture hash from a can, I think, and assume that they don’t like it. But really, what’s not to like about aromatic vegetables slowly sauteed with a lovely bit of roast? The whole emerges crusty and tender and pretty much to die for, especially topped with a poached egg (which I did not include in the pic, my apologies). Hello Brunchy Autumn, aren’t you a handsome fella?

I picked up parsnips today at Kingfield Farmers Market so in they went. Fresh parsnips are sweet and rich-tasting, snag a few if you see them. Roasted, mashed, tossed into stew (or hash!) the way you would potatoes. Outstanding.

A Good Hash
Adapted from The Tenth Muse, My Life in Food by Judith Jones
Serves 2

Melt the butter in an 8-9-inch skillet and sauté the shallots, celery, bell pepper, and mushrooms (if using) until almost soft, about 5 minutes. Stir in the potatoes and the meat, and season with salt and pepper to taste. When everything is beginning to sizzle, pour in the stock (or gravy), and cook over low heat, partially covered, about 10 minutes. Turn the hash over with a spatula, and cook, uncovered, another 5 minutes or so. By now the liquid will have evaporated and a crust should be forming on the bottom. When it is browned to your liking, turn the hash over again and brown the other side. Serve topped with a poached egg (if using) and parsley.

Judith’s note: it is always important to include some aromatic vegetables, to lend moisture and just a touch of sweetness, which helps to encourage the glazing. I sometimes include a little finely chopped carrot or parsnip or white turnip – whatever I may have on hand. It came as a surprise to me to learn from Julia (Child) that a good hash needs some stock or even gravy, if you have it, not only to keep it from drying out but, as with the vegetables, to form the slightly crusty glaze.